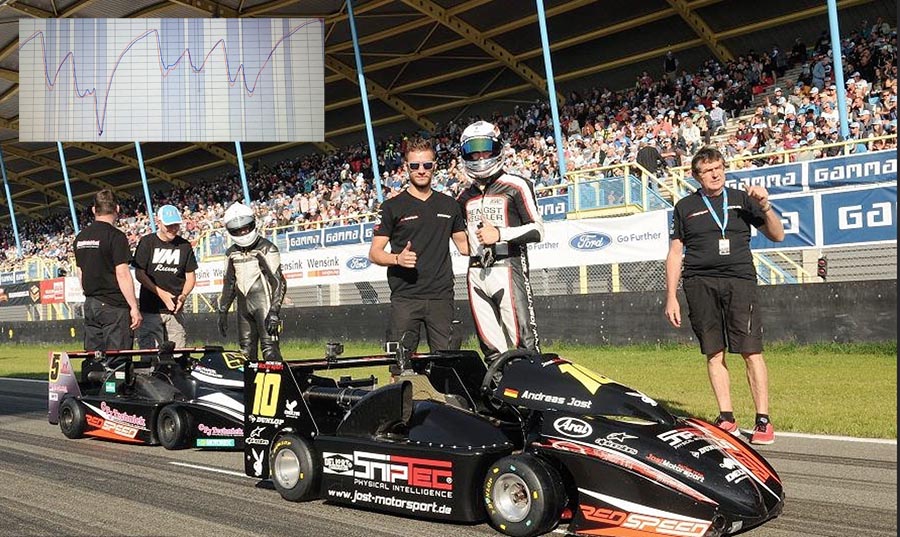 From 04. August until 06.August 2017 the second round of the CIK FIA European Championship took place in Assen (NL) within the Gamma Racing Days in front of more than 100,000 spectators. This is the first event where Snipptec was present to assist Andreas Jost to increasing the performance of his supercart. After the not very good runs 1 & 2 in Donington (GB) for the European Championships, 1 x dropout and 1 x 6th place the pace should be improved significantly. The focus this weekend was to harmonize the chassis, after the first engine problems were already noticeable during the free practice. The engine problems dragged on throughout the whole weekend.
Comparing the best race laps of the years 2016 and 2017 you can clearly see the increased performance in the curves. However, the comparison also reflects the poor performance of the engine. The blue curve indicates the lap time of 2017, the red curve of 2016. You can see the significantly higher cornering speed caused by Snipptec's optimized aerodynamics and tires.
Despite the poor engine performance, Andreas Jost was able to achieve second place in the first race and the absolutely fastest race lap. In the second race, Jost was able to prevail in the race after a difficult start and shortened the gap to Elkmann in the second half of the race to three seconds and again retake the 2nd place. Read the full report at the following link: